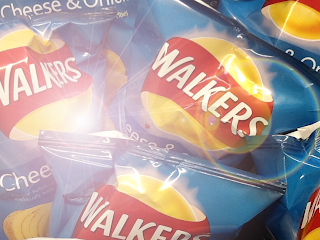 Pugwash Slips by the Excise Men
Two giant containers of smuggled British goodies have been unloaded at Pugwash's secret warehouse this week.

Crisps on Board
On board, apart from the usual mountain of Great British goodies, is the first batch of new Walkers Crisps of 2013.

A Likely Story
The shipment was delayed because the old pirate's ship had to take a detour to avoid the excise men. But, at last the wily captain managed to slip past the King's ships on the St Lawrence and dock under cover of darkness on a beach somewhere near Toronto.

Crisps Arrive Thursday Afternoon
All your favourite flavours should be back on the shelves by Thursday. In the meantime, we still have some of the old batch available on a Buy One Get Free deal.
Posted by Blighty's Tuck Store at 6:02 PM