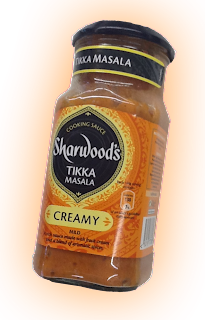 Och Aye the Noo
Some say it was invented in Glasgow. Others claim "Brummagem" or "Noocassel". The former MP for Glasgow Central, Mohammad Sarwar, tabled a motion in the British Parliament calling for EU protection for Glasgow as the recipe's origin city.

It's Not Theirs, It's Ours
One thing is almost unanimously agreed: Indian it ain't; British it is! It is called Tikka Masala. Loosely translated from Hindi, the name means "bits of chicken in a mixture of spices".

Only One Ingredient?
There are many, many different recipes for Tikka Masala. A study conducted in Britain concluded they had only one common ingredient: chicken!

Saucy!
To make Chicken Tikka Masala you should oven roast chunks of tender chicken while preparing a sauce made with cream, yogurt and whatever spices take your fancy. Chuck in some turmeric and paprika to give the dish its signature yellowish colour and Bob's your uncle.

Teaching (East) Indians to Make Curry
Or, come to Blighty's and buy a jar of Sharwood's Tikka Masala sauce prepared by Indians. After all, the Indians ought to know how to make this classic British dish, they played host to the British for nearly a hundred years during the Raj, what-ho?
Posted by Blighty's Tuck Store at 4:46 PM