Why Are These Chocolate HobNobs so Cheap? 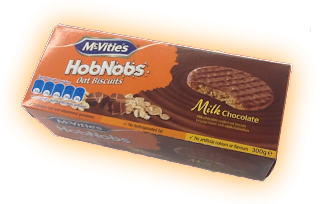 Honestly, we are selling these biccies for 26% below their regular price. No, they are NOT past their "best before" date - they are good for months yet.

We have sold quite a lot of them in the last 2 weeks. Why? Because they taste really good ... and because they are cheap. So why are they so cheap? Well, if you really care, the explanation is below.

This Tall Story Explains It - Trust Me
As you probably read in the past, our importer is called Pugwash (yes the short, plump little pirate character of cartoon fame). He was in England recently, on a buying trip, and was driving up the M1 towards the Midlands. The journey around the M25 after leaving Heathrow was very arduous. The weather was a bit off - grey skies and light, but continuous, spitting rain. And all the way he had been stuck behind a great big lorry. Pugwash wasn't having a good day. But, just after passing Watford Gap services he noticed the tailgate of that darn lorry was shaking loose. His exit ramp for Leicester was coming up but curiosity kept him on the motorway for a few more miles. His eye flashed on a sign warning of the upcoming exit for Burton-on-Trent when, all of a sudden, the lorry hit a large pothole in the road. The tailgate of the lorry burst open and out spilled ... continued on page 94.
Posted by Blighty's Tuck Store at 4:01 PM