The Famous Russian Scent from England 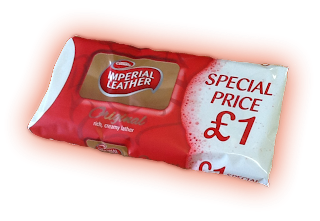 Posh Bang Wallop
Our stock of posh-smelling soap dried up a few weeks back and we were completely sold out. The reason was that the marketing geniuses back in the Land of Hope and Glory had decided to re-package their flagship product.

So Clever?
Now, instead of the old pack in which the three bars were vertically stacked in their package, the same three bars are now horizontally packaged. Wow, the difference is amazing! Once you open the two completely different package shapes, the three soap bars inside are absolutely identical. Isn't that clever? No, I didn't think so either, but you try tell that to the suits in Manchester, England who thought of this rather silly idea.

Buy Cheap Soap, Save Money, Very Good
Somebody commented on Blighty's online shopping site, where we sell Cussons Imperial Leather soap, that they bought some cheap "Imperial Leather" soap somewhere and were very disappointed in it. Yes, that is correct; I have seen cheap knock-offs for sale in bargain shops too. You save a little money but you don't get to smell like a Russian prince.

Blighty's stock of Cussons Imperial Leather soap is made in Manchester, England. How to detect a fake? Use your nose!

Special Price Only £1?
By the way, why does a pack that is price-marked £1 end up costing $3.99 here? Good question; easy answer. The soap has to be paid for in pounds sterling that currently trades around CDN$1.65. But by the time bank transfer and currency exchange charges are added, a pound costs just about a toonie. Then add bloomin' expensive transAtlantic shipping charges, import duty and customs brokerage fees and the cost is already up around three bucks. Then the importer and your friendly retailer would like to make just a small return on their labour and that's where your $3.99 comes along.
Posted by Blighty's Tuck Store at 4:05 PM