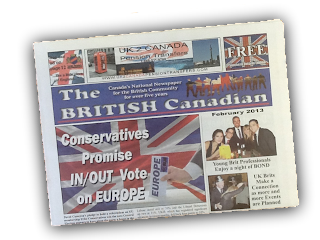 "Conservatives Promise IN/OUT Vote on Europe" trumpets the headline of the February issue of the FREE British Canadian newspaper.

The British Conservatives are locked into a coalition with the Liberal Democrats led by Deputy PM Nick Clegg. The Lib Dems are sinking in the polls while the Conservatives are losing ground to the UK Independence Party. The question of whether to remain a part of the European Union is one of the key issues facing Britain in the next election.

And on a lighter note:
The free newspaper is also full of interesting articles about Britain, Britons in Canada and, of course, Blighty's own satirical column under the byline "Bulldogge". Pick up your free copy on your next visit to the store.
Posted by Blighty's Tuck Store at 3:20 PM