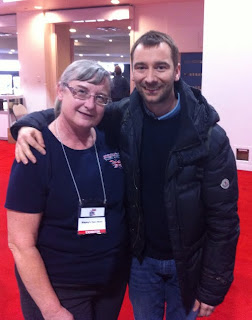 Huge Crowds
As the doors opened at the start of the revived British Isles Show, last Friday morning, a large crowd of visitors anxiously waiting outside, swarmed into Hall 6 at the International Centre in Mississauga.

Success
It may have been a record attendance because the visitors kept coming through all three days of the show. Blighty's had our largest booth ever at the show and our faith in the enthusiasm of the area's expat British population paid off - it was a rewarding event for us.

Guest Star
One of the main attractions at the British Isles Show is always the star guest from Coronation Street. This year, Charlie Condou (Marcus Dent) was the guest. We intercepted Charlie as he was leaving on Sunday and snapped this picture of him standing beside Blighty's booth. Charlie is such a pleasant man; it was a pleasure to meet him.
Posted by Blighty's Tuck Store at 12:50 PM