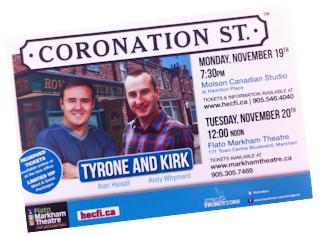 No Couch Potato
There is a Coronation Street fan in Halifax, Nova Scotia who does a lot more than just crash on the sofa in front of the TV to watch the world's longest-running TV soap.

Stroll On
Andrew Stuckless is the principal behind Stroll Promotions, a company that has brought a lot of Coronation Street actors and actresses to Canada. Stroll Promotions brought Corrie's Ken Barlow (aka actor Bill Roache) to Canada earlier this year. In the past the company's star guests featured names like Roy and Hayley Cropper (David Neilson and Julie Hesmondhalgh).