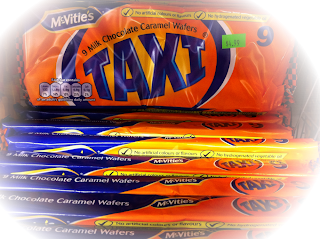 I Wanna Tell You A Story
The late, great Max Bygraves loved to tell us a story. He would have had a field day with all the ammo Canada Food Inspection Agency (CFIA) could have given him.

But they did protect us all from the dangers of eating McVities Penguin biscuits - by banning them from Canada!

Absolutely Unbelievable - But Unfortunately True
In case you missed the Penguin biscuit story, CFIA banned them because they contain added calcium. And the calcium comes from milk. And milk comes from cows. And cows have mad cow disease. Ergo, by CFIA logic you are in danger of catching mad cow disease by eating biscuits. You really couldn't make up a story so hare-brained if you tried.

You Don't Know What You've Got 'til It's Gone
Anyway, until CFIA regains its senses, there isn't a Penguin to be had anywhere in Canada. So the upshot is, we have introduced McVitie's Taxi biscuits instead. Taxi biscuits are made in the UK with caramel wafers and rich chocolate cream covered in milk chocolate. Just $4.99 for a pack of nine. Enjoy.


Click here to inquire about ordering this product online for delivery anywhere in Canada
Posted by Blighty's Tuck Store at 4:57 PM